A comment on Art Basel in Miami Beach, and a contribution to the debate about the role and the effects of the growing number of art fairs: here on ArtNet. 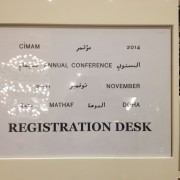 And now, back to work. The first day of the week is: Sunday.

On October 13th Jean Tirole was awarded the Nobel prize in economics for his work on “industrial organisation”. Mr Tirole began publishing in the 1980s, when it quickly became clear that new, liberalised industries might not form perfectly competitive markets. He developed a novel way of thinking about the difficulties regulators face managing such markets. – Source: The Economist

Unless indicated otherwise, this blog content is licensed under a Creative Commons Attribution-NonCommercial-ShareAlike 4.0 International License.
Scroll to top