Die Toten Hosen and the Symphony Orchestra of the Robert Schumann Hochschule played three concerts at the Tonhalle Düsseldorf. Under the title “Welcome to Germany”, the musicians reminded us of the exhibition “Entartete Musik” (“Degenerate Music”) 75 years ago in the Ehrenhof Düsseldorf, where the Tonhalle is located.

With the label “degenerate” the Nazis stigmatized Jewish artists as well as representatives of the avant-garde and jazz music.

In „Willkommen in Deutschland“ (“Welcome to Germany”), Die Toten Hosen and the Robert Schumann Hochschule made the music ostracized by the Nazis the core of a concert evening. The spectrum ranged from film music to compositions of the Comedian Harmonists and Kurt Weill to Schoenberg’s dramatic work ” A Survivor from Warsaw ” and also included several Toten Hosen songs that have been re-arranged especially for this concert. The idea for the show stemmed from the Robert Schumann Hochschule. It was a fantastic, very moving evening that earned nationwide press coverage. 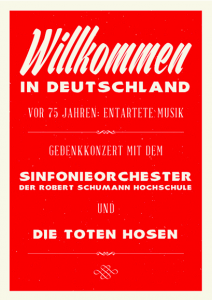