Lenovo and Vodafone: Two round red logos, right next to each other, sharing a hall — a bit too easy  to confuse them, really, you are breeding rumors with that!

Samsung: UHD OLED TV looks like art, I will need some time to get used to it, i.e. watching that without getting a headache.

Karaoke reaches a new dimension. If you’re into that.

Combine several smartphones to one large screen and watch a video together. Okay…

And of course the famous watch. The audience is not nearly as hyped up about it as the press coverage might have suggested.

However, Samsung clearly comes across as the innovation leader; the others didn’t nearly impress me that much. Toshiba? Nothing that stuck in my mind. Philips with kitchen tools. Umh, nice.

Grundig with soccer. Nice try. Grundig also does a lot around household equipment, and their entire hall smells like pancakes.

Amexco. Like you didn’t already catch everybody at the airports. Sigh.

A tiny booth about saving energy. Opposite the crêperie that is distributing its smell so persistently.

An unexpected encounter with a selection of vacuum cleaners.

Some never heard of Asian stalls. Oh, the entire hall 26 is full of them. Spending the entire day in Chinese cooking smells doesn’t seem fun.

Panasonic ad with coffee. (Well, I happen to know people who would appreciate the coffee.) And more vacuum cleaners and washing machines!

Guitars. Fun. (But idiotic people at the stall.)

Public TV hall. Lots of merchandise. And demonstrating augmented reality — not bad, but… Here they go, my public broadcasting fees.

Food smell everywhere, the air conditioning is not at its best. Two hours just walking around, and I haven’t even covered every hall yet. Anyway, time to get out.

Ok, LG impresses me last minute with a polaroid printer for smartphones. Nice gadget, a bit small for charts (printouts are 5 x 7,5 cm), but hey, a light thing the size of a smartphone, 150 €, very close to what I would appreciate having on board.

So I did finally find a new toy on this playground. Happy end. 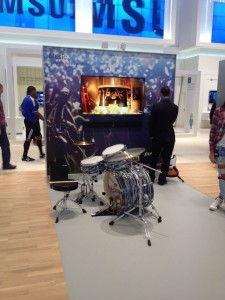 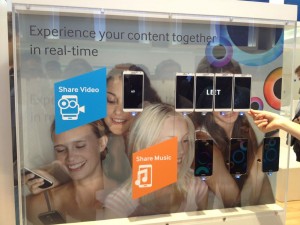 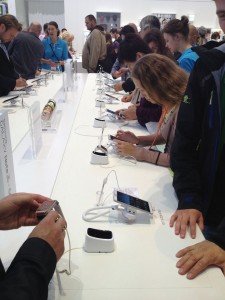 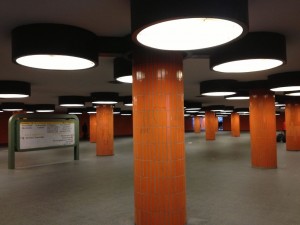 Unless indicated otherwise, this blog content is licensed under a Creative Commons Attribution-NonCommercial-ShareAlike 4.0 International License.
At The Humboldtbox And The Castle-To-Be

New monkeys at the office, by Jörg Immendorf.
Scroll to top